You are here: Home / Archives for films

Full Disclosure: The Green Chain’s producers, Tony Wosk and Mark Leiren-Young are friends mine, but that does not mean that I’d automatically like their movie.  And to be honest I didn’t like it ….. I loved it!  I knew Mark was a good writer, but this isn’t just good writing, this is great writing.

If you don’t know what The Green Chain is about, here’s the synopses:

The Green Chain is a powerful, funny and thought-provoking film about the conflicts between people on both sides of the battle who love trees — and are willing to risk anything to protect their personal visions of the forest. 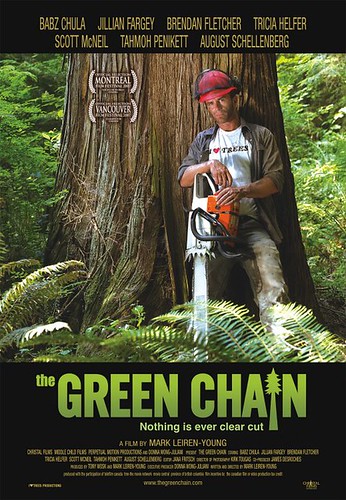 ‘Powerful’ is the perfect descriptor for this film.  It really hit a chord for me and rang so true to many of my own experiences.  I’ve worked in the forestry industry, am a biologist and been an environmentalist, and I saw so much of the dialog and characters in myself and the people I met along the way. It’s uncanny how Mark writes them so perfectly. In my late teens, I was the kid that would have found it to be an adventure to live in the tree and as a biologist I would have been there for many of the reasons that the Raging Granny shared.  As I matured and spent more time in the smaller towns of BC, I discovered that my youthful ideals were a little naive.  It doesn’t matter that I now recognize that the story has more sides, to the forestry workers in the small towns I will always be seen as an educator and one time forestry researcher, and they’ll be too busy defending their right to log to hear me say, ‘I understand’.  My cousin will get into actual fights with me where I don’t say a single word, because in her mind I’m still that scrappy, tree hugging, granola eating, 19 year old, who’d still love to live in a tree (I’d be lying to say I’d never considered it).

I love the way in Mark’s account of this age old story, all the characters touch each others lives.  He does this so seamlessly, but so that it really pulls at the heart strings of our own connectivity, just like that of the ecosystem.  And the beauty is this isn’t just a story about logging.  This is a tale that speaks to many small towns and natural resource based industries. Speaking from the BC perspective, this story could just as easily be fish or rocks.

Oh and I don’t think you have to be an uber science geek like myself to enjoy The Green Chain.  It is simply a good story and I’ll be the first to admit I am a critical audience.  I’m critical of science stories as I am a scientist and storyteller.  There’s nothing to be critical of here, it’s just a darn good story and accurate.  And unlike some science stories, it’s far from boring.  In fact, I will likely watch it numerous time, as I enjoyed it that much!

I am not a ‘catty’ girl.  I don’t normally broadcast on my blog to avoid going to someones wedding, especially after I’ve been to it.  But I have to say after attending Rachel’s wedding at VIFF, the Vancouver International Film Festival, on Saturday, I am telling you all to stay away.

‘Rachel Getting Married’ got great reviews coming out of the Toronto International Film Festival.  Apparently it was a festival favourite and as such, it was the film of choice for VIFF’s Sponsor’s Gala.  These reviews boggle my mind, as a film that I was really excited about seeing, quickly reminded me of why I am so selective about what I will go see in a theater.  For a reason that I have yet to ascertain, the director, Jonathan Demme, decided to film the entire thing on a handheld camera in the style of ‘The Blair Witch Project‘ and ‘Open Water‘.  I was not a fan of this style for the aforementioned films, as it makes me motion sick and want to be violently ill.  It does, however, make sense using this format of filming in telling the stories of ‘The Blair Witch Project’ and ‘Open Water’, as we are getting the POV (Point of View) of one of the characters.  This was not the case for ‘Rachel Getting Married’.  Using a handheld, was not for a POV or to further along the story in anyway that I could discern.  It’s only purpose, as far as I could determine, was to make me want to puke, especially when they decided to use it for dance scene after dance scene causing me to close my eyes and hold my head in the theater as these scenes continued for an excruciatingly long period of time.  Had I not been sitting in the Sponsors Gala Screening with a friend and well known writer in town, I would have exited this film early.

In truth, the other reason that I stayed was that the writer in me was determined to see if there was something in the story that merited the reviews it received in Toronto.  By the end, I wondered whether I could just see no good as I was feeling so ill, so I consulted with those sitting around me, who voiced the same thoughts going through my head.  Where was the story?  As far as we could figure all that was there was a painfully depressing account of a dysfunctional family with none of the humour that accompanies family life and very few glimmers as to the beautiful humanity behind the characters.  For goodness sakes, the poor man playing the father was simply portrayed as this pathetically weak individual with little else to him.  I was just glad this was not a Canadian film. 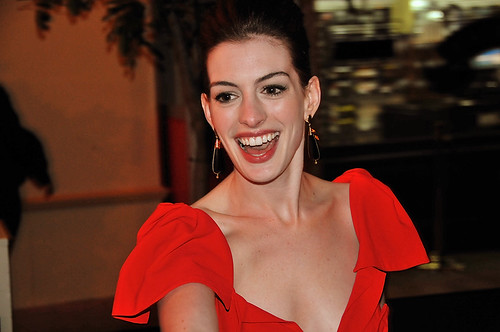 So why did it get such good reviews out of Toronto?  I’m guessing, because Anne Hathaway was in it and it portrayed her in a new role – that I’ve a broken child, who’d brought a great deal of pain to her family and herself through her affliction with drugs.  Trust me though, seeing Anne Hathaway in this role is not worth losing an hour and half of your life to this movie or still feeling sick for the following 4 hours (despite the post film beers to settle your stomach).

Apparently, I am not alone in my view of the movie:

I love movies, I work in the movies, but I have always been a bit of a snob about what I will go see in the movie theater.  And this has been the case long before I knew what ‘green screening’ was or how to tell when it had been poorly done, or noticing continuity, poor acting or directing choices, or what’s happening with the background or set deck.  For me these things have actually made movie watching that much more interesting (especially once I learnt to turn them off and just enjoy the story). But when I can go see live theater in Vancouver for the same price as a movie, the movie had better be something special for me to watch it in the theater.

What does ‘pretty damn good’ translate to in my head?  Well – great cinematography, story and acting.  Other wise, I may still enjoy watching it, but from the comfort of my couch with the cat curled up with me.  Being a lover of children’s stories – this means all the children’s greats (even if the movies rarely do them justice, and yes I am insanely jealous of Walden Media – although I’d rather be creating new stories), I tend to give them priority in the theaters. Also I’m a sucker for British Films.  Love the fact that the people are real and can really act, not just pretty faces.  Also love that the British give us variety and not the same A listers over and over again (although there are a few A Listers that deserve to be there and are fabulous to watch – a future one to watch out for in my mind is one Miss Alexia Fast – the performance she brings to the camera always moves me).  British humor also really speaks to me – yes, I’ll admit it, I am all about the potty and naughty humor.  Calendar Girls and The Full Monty are two of my favorite all time movies.

So I was genuinely surprised and thrilled by what I saw when Ken MacIntrye, Account Manager of Paramount Pictures Western Canada, invited me to an advanced screening of ‘Ghost Town’.  I haven’t seen a picture in the theaters in months that I enjoyed more!  It was absolutely hilarious and I was thrilled to see that North American filmmakers had actually taken a page out of our British colleagues books.  We had finally created something with a solid story and solid acting, rather than just Hollywood gloss with whichever A Lister they could get their hands on. Ricky Gervais and his costars were an absolute hoot! And it’s not just because Ricky has a sexy British accent.  He truly brings this delightful story written by David Koepp and John Kamps to life and without the typically grotesquely large Hollywood budget.

Check it out!  It comes to theaters this Friday – September 19th.